A Sunday Afternoon in Harlem

NEW YORK (April 13, 2015) – Today, IMG confirmed that New York Fashion Week will move downtown into two unique spaces, Skylight at Moynihan Station and Skylight Clarkson Sq, beginning in September 2015 for the Spring/Summer 2016 Collections. The relocation is one step in the evolution of NYFW, which will be reintroduced as a new platform that focuses on content, caters to the needs of the industry, and creates a full cultural experience for guests.

“As IMG prepares to evolve New York Fashion Week, we are focused on creating the best possible experiences that extend beyond a physical location and moment in time,” said Mark Shapiro, Chief Content Officer, IMG. “We’re looking forward to reintroducing the industry to a showcase of creative talent, style and innovation that made the New York runways famous. Part of this showcase involves staying close to inspirational hubs for fashion, art and music, and we’ve found a great new home for that in Skylight at Moynihan Station and Skylight Clarkson Sq.”

After a series of conversations with designers, show producers, journalists and partners, IMG made the strategic decision to move the event to unique spaces that offer superior production elements and versatility. With their west SoHo and west midtown locations, Skylight Clarkson Sq and Skylight at Moynihan Station will enable guests to get to and from other show venues throughout the city more efficiently and connect directly to other cultural hubs. NYFW will also include a more carefully curated designer schedule that will be complimented by strategic partner alliances.

The new homes for NYFW were chosen with the full support of community leaders, including New York State’s Empire State Development, which oversees Moynihan Station; the city of New York; and Mayor Bill de Blasio.

“Moynihan Station is an iconic and historic venue that will provide a unique backdrop for the evolution of New York Fashion Week,” said Empire State Development President, CEO & Commissioner Howard Zemsky. “While ESD continues its work in transforming the expansive facility into a world-class transportation hub, hosting this global event in the Skylight space will support both the fashion and tourism industries and contribute greatly to the New York City economy.”

“From the hundreds of thousands of jobs it creates to the billions of dollars of economic impact generated each year, the fashion industry contributes so much to New York City, and I’m thrilled that New York Fashion Week will bring so much excitement and energy to its next home at Skylight Clarkson Sq and Skylight at Moynihan Station,” said Mayor de Blasio. “My administration will continue efforts to ensure that New York City’s working designers and manufacturers—and those aspiring to join that community—have the support they need to make it in New York City, and continue to grow NYC as the fashion capital of the world. Today’s announcement is an important step in that direction.”

About the spaces Skylight Clarkson Sq and Skylight at Moynihan Station are two venues from Skylight Group, a company that adaptively-reuses historic spaces for high-end events. 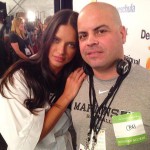 Behind The Curtain of Cirque du Soleil’s Varekai